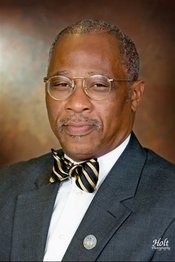 Reginald A. Crenshaw, Ph.D. is a graduate of Morehouse College, where he earned a Bachelor’s Degree in Economics. After returning to his home town, he obtained a Master’s Degree in Public Administration from the University of South Alabama and later earned a Ph.D. in Higher Education Administration from the University of Southern Mississippi. In November 2008, Dr. Crenshaw was elected to the Mobile County Board of School Commissioners and has served two six-year terms. The Mobile County Public School System is the largest school system in the state of Alabama.

Having been employed at Bishop State Community College for over forty years, Dr. Crenshaw has worked his way through the ranks and is currently serving as Director of Title III Programs. He has served in this capacity for almost twenty years.