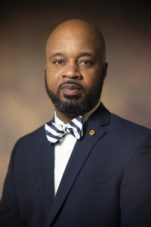 Dr. Mitchell M. Shears is the Associate Vice President for Student Success and Executive Director of Title III at Jackson State University. He has made strides in both K-12 education and higher education.

In K-12, he served as a teacher, a district instructional specialist, principal of two high-performing schools, and assistant superintendent/executive director of academic support. During Dr. Shears’ tenure in JPS, he received numerous awards, including Parents for Public Schools and the Community Foundation of Greater Jackson as a 2003 Outstanding Educator and 2010 Administrator of the Year Award.